How Does This Forest Think? 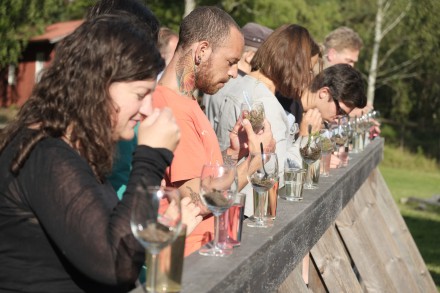 Fifty designers, artists and architects spent a week at our Xskool on Grinda last month to explore two questions: What does this food system taste like? and, How does this forest think?

One team staged the Soil Tasting Ceremony shown above. They made infusions from ten different berries on the island and displayed them next to soil samples taken from each plant’s location; the soils were displayed in wine glasses. We were then invited to compare the tastes of the teas and soils in silence. It was a powerful moment. (There are more images here).

Ahead of the event I thought soil health would be hard to sell to a cerebral group of (mostly) grad students. Today’s designers think far more about connecting with each other, I assumed, than about connecting with the soil. Why would they? Fewer than half of us ever see or touch the stuff.

My concern that living soil would not engage designers proved unfounded. It was like pushing at an open door. Xskoolers went scrabbling around the forest of Grinda like so many voles. They found ways to catch the taste of the forest and put it in a pot. They made cookies with forest berries and bartered these with tourists. They created tactile pathways so we could we feel the forest through our feet. A Latvian designer made pine cone syrup and gave it to Teacher, who was mightily pleased.

This positive energy was welcome, but unexpected. In searching for an explanation I came across a wonderful book called Soil and Soul by Alastair McIntosh.“We yearn for connection with one another, and with the soul” McIntosh writes, “but we forget that, like the earthworm, we too are an organism of the soil. We too need grounding”.

Resilience and systems thinking, I concluded from McIntosh’s book, will never be transformational in the absence of systems feeling. But how? Asking researchers to empathise with earthworms feels like a big ask. For every designer learning how to think like a forest by tasting one, as we did on Grinda, thousands more spend most of their time in studios, online, or within the rarefied walls of the research economy.

Perhaps my search for a ‘solution’ to the ecoliteracy ‘problem’ is old-fashioned. In a post-Xskool reflection, Helen Silvander wrote: “If we truly want people to value nature and food from a sustainable point of view, maybe we should allow them to fight for it a bit. Instead of simplifying, maybe we should de-organise. Instead of widening the path, maybe we should explore what happens when we erase it, and let time be the currency of payment”.

Here is the Xskool Facebook page.  I also gave this year’s Xskoolers a Food Systems Reader. Xskool  was a partnership between Doors of Perception, Konstfack, and FuturePerfect Festival. This event builds on a series of experimental Xskool encounters over the last three years including Xskool Grinda 2013.

For this year’s UnBox Festival in New Delhi (12-14 December) I’ll be joining Mansi Gupta for a workshop to develop the programme of the Kanpur Design Innovation Lab. The project embodies, in Mansi’s words, “a new story about the leather industry and the people who work in it”. The Lab, situated at the heart of India’s largest leather-producing region, will develop products and services that combine clean forms of leather making with direct connections between between producers and customers. If I have any say in the matter, I’ll also be re-visiting the subject of cycle commerce  and my modest proposal for the de-motorisation of Delhi.

MY TALKS THIS AUTUMN